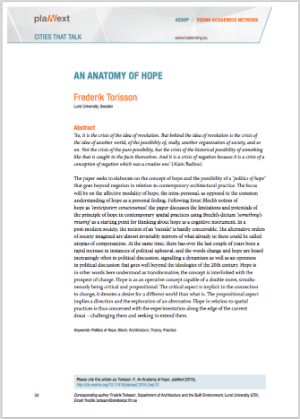 An Anatomy of hope

The paper seeks to elaborate on the concept of hope and the possibility of a 'politics of hope' that goes beyond negation in relation to contemporary architectural practice. The focus will be on the affective modality of hope, the intra-personal, as opposed to the common understanding of hope as a personal feeling. Following Ernst Bloch's notion of hope as 'anticipatory consciousness', the paper discusses the limitations and potentials of the principle of hope in contemporary spatial practices using Brecht's dictum 'something's missing' as a starting point for thinking about hope as a cognitive instrument. In a post-modern society, the notion of an 'outside' is hardly conceivable. The alternative orders of society imagined are almost invariably mirrors of what already is; these could be called utopias of compensation.

At the same time, there has over the last couple of years been a rapid increase in instances of political upheaval, and the words change and hope are heard increasingly often in political discussion, signalling a dynamism as well as an openness in political discussion that goes well beyond the ideologies of the 20th century. Hope is in other words here understood as transformative; the concept is interlinked with the prospect of change. Hope is as an operative concept capable of a double move, simulta- neously being critical and propositional. The critical aspect is implicit in the connection to change; it denotes a desire for a different world than what is. The propositional aspect implies a direction and the exploration of an alternative. Hope in relation to spatial practices is thus concerned with the experimentation along the edge of the current doxai – challenging them and seeking to extend them.