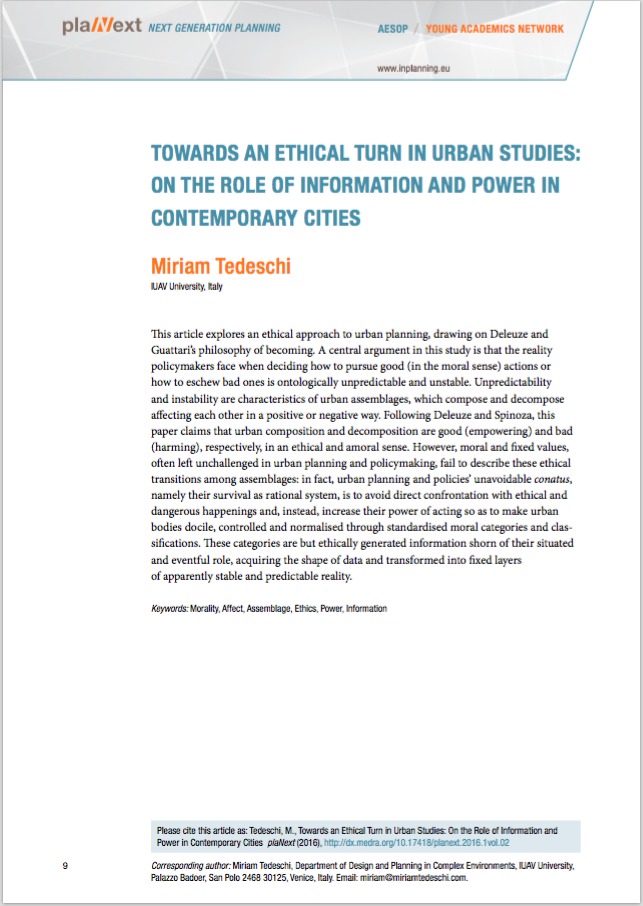 This article explores an ethical approach to urban planning, drawing on Deleuze and Guattari's philosophy of becoming. A central argument in this study is that the reality policymakers face when deciding how to pursue good (in the moral sense) actions or
how to eschew bad ones is ontologically unpredictable and unstable. Unpredictability
and instability are characteristics of urban assemblages, which compose and decompose affecting each other in a positive or negative way. Following Deleuze and Spinoza, this paper claims that urban composition and decomposition are good (empowering) and bad (harming), respectively, in an ethical and amoral sense. However, moral and fixed values, often left unchallenged in urban planning and policymaking, fail to describe these ethical transitions among assemblages: in fact, urban planning and policies' unavoidable conatus, namely their survival as rational system, is to avoid direct confrontation with ethical and dangerous happenings and, instead, increase their power of acting so as to make urban bodies docile, controlled and normalised through standardised moral categories and clas- sifications. These categories are but ethically generated information shorn of their situated and eventful role, acquiring the shape of data and transformed into fixed layers of apparently stable and predictable reality.